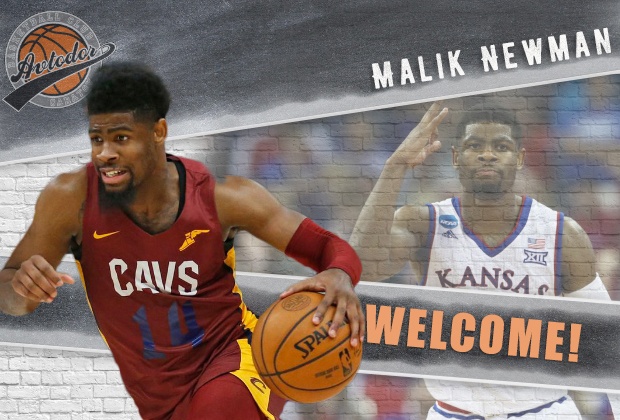 Avtodor signed a contract until the end of the 2022/23 season with 25-year-old American defender Malik NEWMAN (191 cm, 86 kg), who has experience playing in the NBA.

Last season, the Kansas University graduate played 34 games for the Canton Charge in the NBA G-League, averaging 18.7 points, 3.9 rebounds and 3.7 assists in 30 minutes of playing time. On 30th December 2021, the guard took part in an NBA regular season game for Cleveland Cavaliers against the Washington Wizards, recording 8 points, 1 rebound and 1 assist in 8 playing minutes on the floor.

In 2018, Newman led the University of Kansas to the March Madness (NCAA Division I Final Four) and was named the MVP and the Big 12 Newcomer of the Year. From 2018 to 2020, he played in the G League for Sioux Falls Skyforce and Canton Charge. In February 2020, Malik made his debut for the Cleveland Cavaliers against the Los Angeles Clippers, scoring his first points in the National Basketball Association.

In the summer of 2020, Newman moved to Europe, where he played for Bursaspor (Turkey) and Ironi Nahariya (Israel). At the end of the 2020-21 season, the American showed the third percentage of the free throw made in the Israeli League - 91.8%.

The Avtodor newcomer was also the leader of the US U17 National Team with the Boston Celtics star forward Jason Tatum leading them to the U17 World Championship title in Dubai (UAE) in 2014 and was named the MVP of the competition. In the final game against Argentina (99:92), Newman had a double-double, becoming the best in his team in scoring (21 points), rebounding (11) and assists (3). A year earlier, he won the American U16 champion with the US cadet national team.

Vladimir RODIONOV
Avtodor President:
“With the arrival of Newman, we expect to increase the offensive potential of the team and get a serious fighting unit on the back line. Our breeding work is not limited to the signing of an American defender. We continue to monitor the transfer market in order to strengthen the squad."

Malik NEWMAN , Avtodor defender:
“I want to tell the fans of the Saratov team that I am extremely happy to be in Avtodor and will be even more happy to please them with victories.”