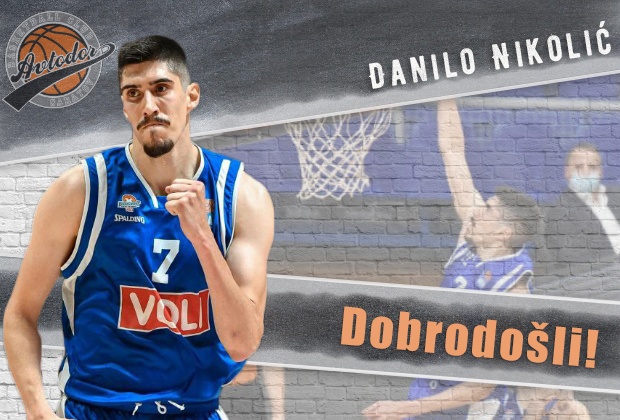 Basketball Club Avtodor has signed a contract with power forward Danilo NIKOLIC (207 cm, 96 kg), who had 26 Euroleague and 60 Eurocup games at his disposal. The agreement with the 29-year-old Montenegrin is for a month and a half including the option of extending until the end of the 2022-23 season.

Nikolic started the season in JDA Bourgogne Dijon, showing an average statistics of 5 points and 3 rebounds in 18 minutes of playing time in 3 matches of the French League. On October 5, in the road win of the Basketball Champions League regular season in Thessaloniki against the Greek PAOK ( 70:66 ), the Avtodor newcomer recorded 6 points, 4 rebounds and 2 blocked shots in 26:41 minutes on the floor.

Over the past 4 seasons, Danilo defended the colors of KK Budućnost VOLI Montenegro, for which he had previously played from 2011 to 2014. In total, as part of a team from Podgorica, he became a 5-time Montenegrin champion and won 7 national Cups. In 2018, Nikolic helped KK Budućnost VOLI to win the Adriatic Basketball League and qualify for the top European club competition. In the 2018-19 season, the forward played 26 games in the Euroleague averaging 5.4 points and 2.4 rebounds in 14.2 minutes of playing time.

In November 2018, Danilo scored 14 points in a home game against CSKA Moscow, bringing his team a 93-92 win over the Russian side with the last second successful shot.

For two seasons from 2014 to 2016, Nikolic was a teammate of Rade Zagorac in Mega Belgrade, which Avtodor forwards led to earn the Serbian Cup in 2016. In his career, Danilo also played for Bilbao Basket (Spain), Lovcen Cetinje and Gorstak Kolasin Montenegro.

Danilo NIKOLICH , Avtodor forward:
“I am very excited about the next challenge and trip to Russia. This will be a new experience for me. Looking forward to meeting new teammates. I hope I can bring energy to the team and we will be successful this season.”