Preview to the match of the 12th round of the VTB United League regular season
CSKA (Moscow) vs. Avtodor (Saratov). 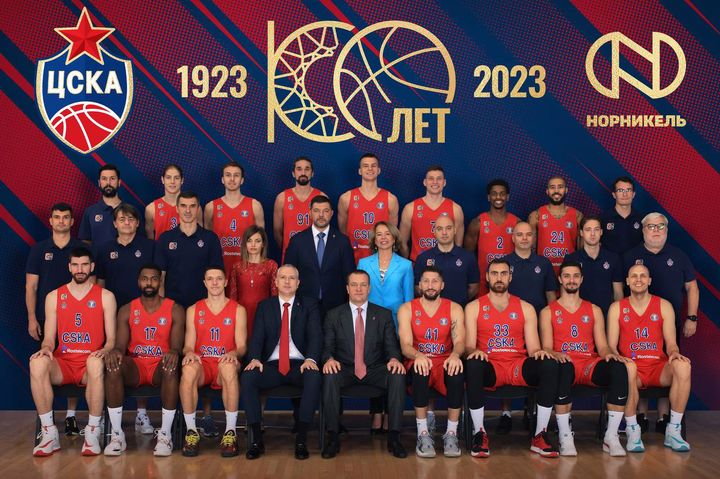 DISPOSITION:
Avtodor (4-7), which last week scored a mini-streak of 2 wins and reduced the gap to the coveted 6th place to a minimum, opens the second round of the VTB United League regular season with an away game with the sole leader of the table - Moscow CSKA Moscow (11–0) under the leadership of ex-black and white head coach Emil RAYKOVICH . "CSKA" confidently overcame the 11-match distance of the first round without a single defeat, while winning 7 meetings with a devastating score.

Despite the fact that Avtodor lost the last 14 head-to-head matches to CSKA, there is a basketball player in the current Saratov team who knows the taste of victory over the army team. Exactly 4 years ago, on November 23, 2018, Montenegrin forward Danilo NIKOLICH brought Buducnost a strong-willed victory with a score of 93:92 over the future Euroleague champion with an accurate throw in the last seconds!

Of the 6 games in October in the VTB United League, the capital club experienced local difficulties only in Krasnodar, losing the opening quarter to Lokomotiv-Kuban with a score of 14:22. However, by the big break, the red-blues took the lead (40:36), and in the second half they scored a rout - 84:64 .

CSKA passed its first truly serious test on November 1 , taking away from St. Petersburg a victory over the current champion of the VTB United League Zenit - 85:80 . The guests achieved a comfortable 14-point handicap at the end of the first half (49:35), but 50 seconds before the final siren, the blue-white-blue managed to get closer to the opponent at a distance of 68:70. However, the timely finishing of Milutinov and the accuracy of the Serb's teammates from the penalty line left the match for Rajkovic 's wards. The top scorers among the winners were Nikola MILUTINOV (22 + 10 rebounds), Dallas MOORE (18), Casper WAIR (16) and Alexey SHVED (10 + 9 assists).

Only 10 days after the triumph on the banks of the Neva, our rivals in their native Megasport confidently outplayed UNICS Kazan, the bronze medalist of the last season - 92:79 . The outcome of the confrontation was predetermined by a trio of hosts - Nikola MILUTINOV , who scored a double-double of 24 points with 12 rebounds, Alexey ShVED (20 points + 9 assists + 5 rebounds) and Dallas MUR , who shot 21 points with 80% of the implementation of attempts from behind the arc (4 /5).

The last time CSKA lost was almost 2 months ago - on September 25, in the Super Cup final in Moscow, the "soldiers" lost the trophy in the last seconds, losing with a minimum score of 70:71 to their principal opponent Zenit thanks to an incredible 3-point hit by the guests with a siren:

SEASON-2021/22:
Last season, CSKA, under the guidance of the current Fenerbahce and Greek team coach Dimitris Itoudis, was in sixth place in the Euroleague with 14 wins - 10 losses at the time of the removal of Russian teams from participation in the main club tournament of the Old World.

COMPOUND:
In the current application of CSKA there are 5 legionnaires: 2 Americans, 2 Serbs and a Frenchman. The average height of the team is 198.7 cm, the average age is 27.9 years.

At the end of last season, CSKA parted ways with its main assets of the last decade - head coach Dimitris ITOUDIS and American forward Will CLIBURN , who moved to the shores of the Bosphorus. The key success of the summer selection of the capital club was the retention of the Serbian national team center Nikola MILUTINOV and one of the strongest Russian basketball players of our time Alexei Shved .

PARTICULARLY DANGEROUS:
The leaders of the updated CSKA have not changed. In the back line, the role of the first violin is habitually played by 33-year-old defender Alexei ShVED , the best scorer of EuroBasket 2017 and twice the winner of the Euroleague top scorer award (2018 and 2021). According to the results of the 1st round, the star basketball player is in the Top 5 players of the championship in terms of performance ( 16.3 points), assists (average of 6 assists per game) and efficiency, and also leads the Moscow team in steals ( 1.1 ) .

Serbian team center Nikola MILUTINOV , the current leader of the VTB United League in terms of efficiency and rebounds, dominates under the shields of the "soldiers". Averages for the 27-year-old Balkan big in the first round were 15.5 points and 9.0 rebounds in 23 minutes. With his stable performance, Milutinov was awarded the title of VTB United League MVP in October.

Foreign newcomers came to court in CSKA - 29-year-old French forward Livio JEAN-CHARLES from the Greek Olympiacos ( 9.3 points + 5.1 rebounds in the VTB League), 27-year-old Serbian forward Dejan DAVIDOVATs (average 7.9 points and 4.4 rebounds in the first round), who moved to Moscow from Crvena Zvezda, as well as 28-year-old American defender Dallas MUR ( 10.6 points + 2.9 assists), who last season was a teammate of the Serbian forward " Avtodor Rade Zagorac in Partizan Belgrade.

PERSONAL ACCOUNTS:
The overall ratio of victories and defeats - 16:60 is not in favor of the Volga. Saratov fans with experience remember very well the principled battles between Avtodor and CSKA in the late 1990s for the gold medal in the national championship. In the second half of the 1990s, Avtodor was the only Russian team that was a worthy competitor to the red and blue in the fight for the championship title.

The club from the banks of the Volga became the champion of the Superleague, but, much to the chagrin of its fans, it failed to defeat the "soldiers" in the final series of the playoffs of the Russian championship. The Saratov team was closest to victory in the 1996/97 season, when, with a 2-2 score in the superfinal series in the decisive fifth match, Avtodor could not overcome the resistance of CSKA at home. The series of superfinals in 1997/98 and 1998/99 turned out to be just as stubborn. In the 2001/02 season, the Saratov team finally beat the Muscovites in the playoffs. In the quarterfinals of the Russian Championship, Avtodor won the series with a score of 2-0 and became the only Russian club to leave the country's most titled club without a medal.

In recent history, after the return of Avtodor to the basketball elite, the upcoming match will be the 16th face-to-face confrontation between the rivals. On their court, the black-and-whites were very close to defeating CSKA in the 2016/17 season, when on October 30, 2016 on the floor of the DS "Kristall" they suffered an unfortunate defeat in overtime in the battle with the current champion of the Euroleague - 103:104 OT (Minnerat 21+9 rebounds – Teodosic 22+11 rebounds+8 assists) .

IN THE PREVIOUS SERIES…
Exactly one month ago - on October 23 - within the framework of the 5th round, the long-term champion of the country CSKA converted a 14-fold superiority in the clubs' budgets into a result on the scoreboard, having won a confident victory over Avtodor with a score of 102:75 thanks to 31 points for two superstar duets in represented by Alexei Shved and Nikola MILUTINOV .

FAMILY TIES:
Avtodor gave a start to life and became the first professional club in the career of the Honored Master of Sports, bronze medalist of the 2012 Olympic Games and the 2011 European Championship, Euroleague 2019 champion Semyon ANTONOV , now a player of CSKA and the national team.

CSKA forward Anton ASTAPKOVICH played in Saratov in the 2016/17 season. The defender of the Moscow club Artem KOMOLOV helped Avtodor win the Superleague championship in 2014 and win a ticket to the VTB United League on a sporting basis.

The captain of the black-and-white Evgeny KOLESNIKOV spent the end of last season in CSKA, in which he became the silver medalist of the national championship. And the new head coach of the capital's team, Emil RAIKOVICH , and his assistant , Marko VELICHKOVICH , worked at Avtodor last season.

INfirmary:
Avtodor forward Alexander PETENEV remained in Saratov, having injured his brush. By decision of the medical staff of the Saratov club, the game with CSKA will be missed by defenders Ryan BOUTRIGHT and Malik NEWMAN , as well as forward Brandon GARRETT . In addition, defender Nikita MIKHAILOVSKY , who sprained his ankle in a pre-match training session in Moscow, will not help black and white. As part of the “army team”, there were also losses - exactly a month ago, on the banks of the Volga, forward Semyon ANTONOV received a serious injury to the Achilles tendon, having been out of action for a long time.

BOOKMAKER FORECAST:
Bookmakers consider CSKA to be the undisputed favorite of the upcoming meeting and offer to bet on the hosts' victory with a handicap of "-23.5".

ABOUT THE CLUB:
PBC CSKA is the most titled Russian team, the second in terms of the number of trophies in Europe after Real Madrid. Basketball club CSKA traces its history back to 1923, when it was formed under the name OPPV (Experimental and Demonstrative Sports Ground of Vsevobuch), created on the basis of OLLS (Society of Skiing Fans). The team received its current name only in 1960. Prior to that, the club was called both CDKA (Central House of the Red Army) and CSK MO (Central Sports Club of the Ministry of Defense).

In the 1969/70 season, the legendary Alexander Yakovlevich GOMELSKY became the new head coach. It was under him that the team won the USSR championship more than 10 times and repeatedly won the European Champions Cup. 1979 is the last year in the activities of Alexander Gomelsky as the head coach of the club. Over the years of its existence, the army team has collected the richest collection of trophies.

Last season, the four-time Euroleague champions broke their 18-year hegemony in the domestic arena, losing in the final series to Zenit - 3-4.